VANCOUVER, BC--(Marketwired - May 27, 2014) - GoldQuest Mining Corp. (: )(: )(: ) ("GoldQuest" or the "Company") is pleased to report positive results from the un-optimized Preliminary Economic Assessment ("PEA") for a proposed underground mine at its 100% owned Romero and Romero South Gold-Copper Deposits in the Dominican Republic. The PEA study was led by Micon International Limited ("Micon"). All costs are in US dollars.

"We are proud to deliver a positive PEA for the Romero Project, our cornerstone asset in the Dominican Republic," commented Chief Executive Officer, Julio Espaillat. "Building on our low net All-In Sustaining Costs, we are actively addressing the capital intensity issues of the Romero project through ongoing optimization studies. We also hope to add value through discovery of new resources, which is the focus of our 10,000 metre 2014 exploration drilling program."

The following table is a summary of the PEA parameters or inputs:

The following table is a summary of the PEA results:

The following figure presents the PEA sensitivities, showing leverage to metals prices being the most important variable: 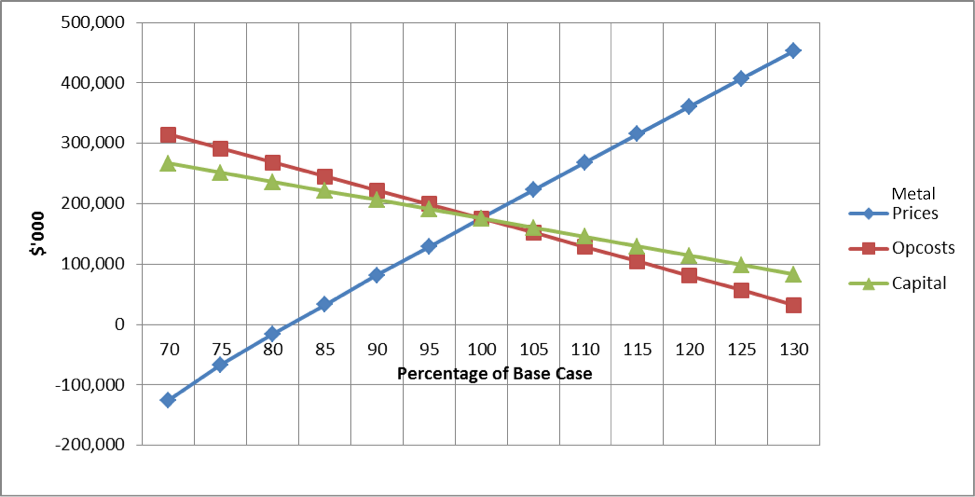 Mineral Resources:
The basis for the PEA is the mineral resource estimate prepared by Micon as set out in the Company's National Instrument 43-101 ("NI 43-101") report dated December 13, 2013 and effective October 29, 2013 entitled "A Mineral Resource Estimate for the Romero Project, Tireo Property, Province of San Juan, Dominican Republic", which was filed on SEDAR on December 13, 2013. Please refer to the technical report for further information regarding the mineral resource estimate. For the purposes of reporting the mineral resources, Micon selected a net smelter returns ("NSR") cut-off of US$60 (operating cost/commodity price weighted recovery) as an estimate of what might be a reasonable marginal cost of extraction at Romero and US$50 as the marginal cost of extraction at Romero South. Metal prices used were Au = US$1,400/oz., Ag = US$22.50/oz., Cu = US$3.18/lb. and Zn = US$0.95/lb.

A summary of this resource is:

Note: Mineral resources that are not mineral reserves do not have demonstrated economic viability.

Mine Plan:
The mine plan for the Romero deposit uses mechanized longhole stoping with both ramp and shaft access. At full production, crushed ore is hoisted to the surface at an average rate of 3,800 tpd. The mining method requires sinking and equipping the shaft, installing the primary crusher station at the bottom of the mine and making provision for backfill from bottom up during the pre-production development period, which generally increases up-front capital (lowering IRR) but results in lower sustaining capital and lower operating costs per tonne, compared to other operations. The mine plan includes provisions for mining losses and dilution. Some further drilling is recommended to upgrade inferred resources to the higher measured and indicated categories, as well as geotechnical and metallurgical drilling as part of any pre-feasibility study.

It is proposed that the Romero South deposit would go into production in year 14. The mine plan takes advantage of the deposit outcrop and requires very little waste development. Modified room and pillar mining with backfill is the proposed mining method. The planned production rate is 2,700 tpd and the mining is expected to continue through the third quarter of year 15.

Processing and Metallurgy:
The processing flow sheet selected for the PEA consists of crushing, grinding and flotation to produce two concentrates; a copper/gold sulphide concentrate and a gold oxide concentrate, neither of which contains any significant deleterious elements. 92% of the total copper and 51% of the total gold reports to the copper concentrate and 32% of the total gold reports to the gold concentrate. Bio-oxidation will be used for the gold concentrate only and dry stacking will be used for tailings disposal. This flow sheet is based on extensive metallurgical testing carried out by ALS laboratories in Kamloops BC and Perth Australia under the supervision of Micon. Total recoveries into the final concentrates, based on existing metallurgical test work, are expected to be approximately 83% for gold and 91% for copper resulting in net payable gold of 79.2% and net payable copper of 86.5%. Both concentrates will be trucked from the mine site for further processing.

Operating Costs:
The operating costs used in the PEA were estimated from first principles using local unit rates for labour, consumables and power where possible, and Micon's estimates for the off site costs. The Life of Mine All-In Sustaining Costs (AISC) are estimated to be $353/oz of Au per year, for 90,000 ounce of Au per year, consisting of on-site operating cash costs of $153/oz, net of copper and minor silver by-products, concentrate transportation and TC/RC costs of $147/oz, royalties of $21/oz and sustaining capital of $32/oz.

Capital Costs:
The pre-production capital cost is estimated to be $333.5 million, plus $40.4 million for LOM sustaining capital, for a total estimated LOM capital cost of $374 million, for a pre-production capital intensity of $18.07 per LOM tonne processed. Initial capital expenditures are based on 3,800 tonnes per day (1,380,000 tonnes per year) throughput. The up-front capital costs include the underground mine, processing facilities, infrastructure and hydro-electric installations prior to production and include contingencies of $52.4 million, EPCM costs of $19.8 million and $55.4 million for infrastructure costs including the hydro-electric installations. Project electrical requirements are estimated at 14MW.

The estimated preproduction capital costs are summarized in the table below.

A technical report supporting the PEA will be filed on SEDAR within 45 days.

The technical information contained in this news release is based upon information prepared by Messrs. Hennessey, Jacobs, Gowans and Ms Dreesbach of Micon International Ltd., who are each a Qualified Person and independent of GoldQuest as defined by NI 43-101.

Jeremy K. Niemi, P.Geo., VP Exploration, GoldQuest Mining Inc., is the Qualified Person who supervised the preparation of the technical data in this news release.

GoldQuest is a Canadian based mineral exploration company with projects in the Dominican Republic traded on the TSX-V under the symbol GQC.V and in Frankfurt/Berlin with symbol M1W, with 145,755,044 shares outstanding as at May 14, 2014 (160,096,563 on a fully diluted basis, as at May 14, 2014). is actively exploring the Tireo Project, a 50 kilometre long land package which encompasses the Romero and Romero South deposits. The company seeks to grow mineral resources through an aggressive exploration campaign.

Statements contained in this news release that are not historical facts are forward-looking information that involves known and unknown risks and uncertainties. Forward-looking statements in this news release include, but are not limited to, statements with respect to the PEA results, the proposed underground mine, the discovery of new mineral resources, mineral resource estimates, the merits of the Company's mineral properties, future studies, and the Company's plans and exploration programs for its mineral properties, including the timing of such plans and programs. In certain cases, forward-looking statements can be identified by the use of words such as "plans", "has proven", "expects" or "does not expect", "is expected", "potential", "goal", "proposed", "appears", "budget", "scheduled", "estimates", "forecasts", "at least", "intends", "hope", "anticipates" or "does not anticipate", or "believes", or variations of such words and phrases or state that certain actions, events or results "may", "could", "would", "should", "might" or "will be taken", "occur" or "be achieved".

Forward-looking statements involve known and unknown risks, uncertainties and other factors which may cause the actual results, performance or achievements of the Company to be materially different from any future results, performance or achievements expressed or implied by the forward-looking statements. Such risks and other factors include, among others, risks related to uncertainties inherent in the preparation of the PEA and in the estimation of mineral resources; commodity prices; changes in general economic conditions; market sentiment; currency exchange rates; the Company's ability to continue as a going concern; the Company's ability to raise funds through equity financings; risks inherent in mineral exploration; risks related to operations in foreign countries; future prices of metals; failure of equipment or processes to operate as anticipated; accidents, labor disputes and other risks of the mining industry; delays in obtaining governmental approvals; government regulation of mining operations; environmental risks; title disputes or claims; limitations on insurance coverage and the timing and possible outcome of litigation. Although the Company has attempted to identify important factors that could affect the Company and may cause actual actions, events or results to differ materially from those described in forward-looking statements, there may be other factors that cause actions, events or results not to be as anticipated, estimated or intended. There can be no assurance that forward-looking statements will prove to be accurate, as actual results and future events could differ materially from those anticipated in such statements. Accordingly, do not place undue reliance on forward-looking statements. All statements are made as of the date of this news release and the Company is under no obligation to update or alter any forward-looking statements except as required under applicable securities laws.

Forward-looking statements are based on assumptions that the Company believes to be reasonable, including expectations regarding the PEA parameters and inputs, mineral exploration and development costs; expected trends in mineral prices and currency exchange rates; the accuracy of the Company's current mineral resource estimates; that the Company's activities will be in accordance with the Company's public statements and stated goals; that there will be no material adverse change affecting the Company or its properties; that all required approvals will be obtained and that there will be no significant disruptions affecting the Company or its properties.

GoldQuest Mining Corp.
Bill Fisher
Executive Chairman
Office of the Chairman - Toronto
+1-416-583-5606
This email address is being protected from spambots. You need JavaScript enabled to view it.
www.goldquestcorp.com